When her son’s birthday rolled around, my friend Jenny came to me for some custom design work. We exchanged emails and she quickly settled on an airplane theme. Jenny is pretty creative in her own right and has a fantastic sense of humor so I knew we’d have a laugh (or two). We bounced lots of ideas around, and here’s her account of the fun she served up for her little boy’s big day! It’s pretty stinkin’ cute! I hope you enjoy Jenny’s high flying airplane birthday.  To see further detail just click on the photo.
………
Tate’s second birthday party “took off” as approximately 10 young passengers and their carry-on parents joined us for an airplane theme party.
First, the invitations were sent out to look like boarding passes:

My friend Eleanor at Pink Peppermint Paper did all of the creative and design work, and she is fabulous! She designed the “Tate Airways” logo that says “Flying High Since 2007.” We sent the invitations in red envelopes with a button tie closure to look like travel documents. The return address said “Tate Airways” and we printed “Important Travel Documents Enclosed” in a stamp font on the envelope to make it look official. The location was Founders Plaza, which is an observation area at DFW airport where you can watch planes take off and land. I called the airport for permission and was told they never had a birthday party there before! But it’s one of Tate’s favorite spots to visit, so we thought it would be enjoyed by his friends as well. 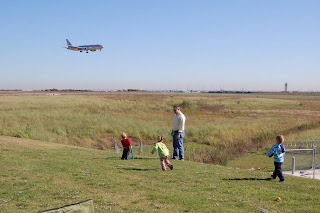 A banner I printed at FedEx Office greeted guests to our picnic area. 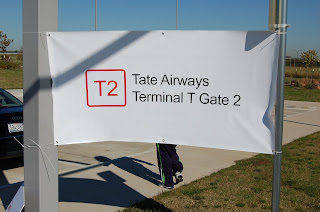 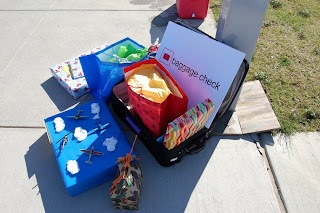 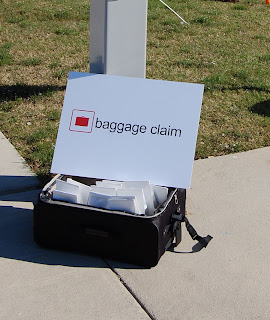 My sisters both wore white shirts and black pants to look like TSA security. I gave them badges that said “TSA: Tate’s Super Aunts.” 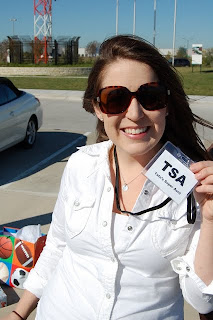 For lunch, we served Lunchables. Not only was it easy for a picnic setting, but the packaging looks like airplane trays! I also had individual packages of pretzels, because, you know, that’s what you get on airplanes. My sister cut out placemats in the shape of white clouds for the blue tablecloth. 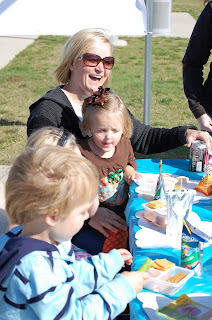 We had some airplane theme toys for the kids to play with. 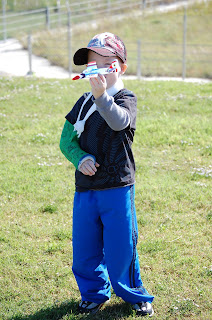 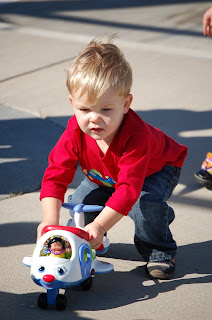 Cousin Blake brought his own seat. I guess he didn’t want to ride ‘coach’ with the rest of the party-goers at the picnic table! 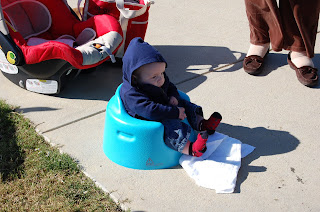 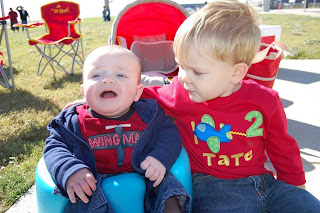 Note that cousin Blake came dressed in an appropriate “wing man” shirt to serve as Tate’s sidekick!
The cake. Um yeah. It was made out of cupcakes and was supposed to be in the shape of an airplane. I’m not so sure.
And I picked it up on the way to the party and didn’t even notice that Tate’s name was spelled “Take.” Luckily my Mom did a quick fix on it to correct it. 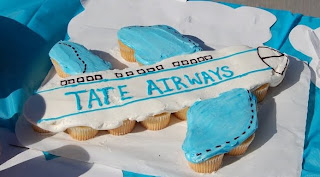 For the favors, I ordered white bags that look like air-sickness bags (aka “barf bags.”) The stickers were done by Pink Peppermint Paper and say “We’re Sick to See You Go. On behalf of our captain and flight crew, thanks for flying Tate Airways.” 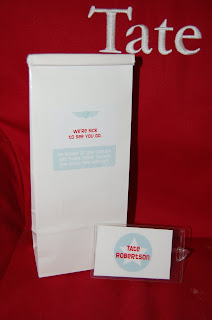 Inside the bags we had rubber ducks dressed like pilots, a glider plane, little plastic parachute men and individual luggage tags for each guest.
After the party, we sent thank you notes from “Captain Tate Robertson.” 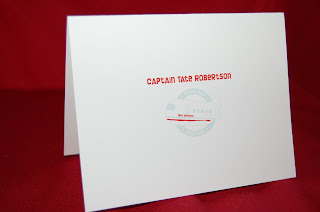 We had a great time, and the birthday boy loved every minute of watching the “ah panes” land with his friends! 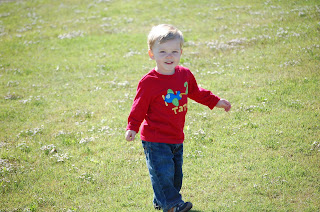 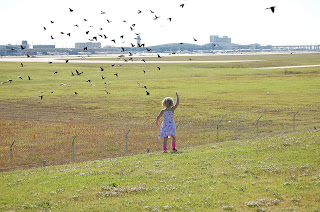