I have a fantastic golf party to share with you today. This is another sweet soirée from my pal Jenny. You may remember the adorable airplane-themed party she hosted for her son last year. Jenny is so hilarious and creative that I get all twittery with excitement when she contacts me about a party because I know it will be awesome!

This year she {and everyone else in her house apparently} had golf on the brain. Husband loves it. Son loves it. There you have it. Golf party. I think a lot of us hear golf party and think “putt putt,” but Jenny as well as Amaris, hostess of the first super cute golf party I helped with earlier in the year, have made a great case for this theme with the younger crowd. I mean, what toddler doesn’t love to beat the stew out of something with a set of plastic sticks? Exactly.
Lauren and I got busy chipping away at some party inspiration.  Here’s the custom invitation I did. It may look like I can’t spell, but the birthday boy’s name is Tate, so we went with the “3rd Annual Birthday InviTATEtional” and the copy read like a sportscaster’s script. Something a little playful and different.

They planned to set everything up outside, but on party day it poured all day long. Jenny said they had to “call a mulligan” and set the party up inside, declaring the backyard a Water Hazard. Too funny. 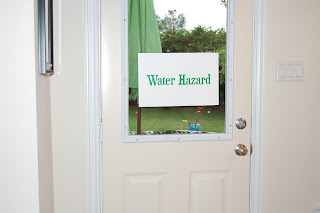 Here’s the first hole in the entry way. 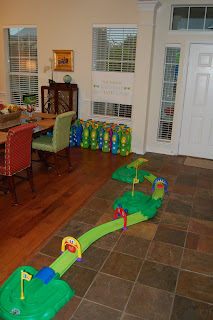 And a couple of holes down the hallway. 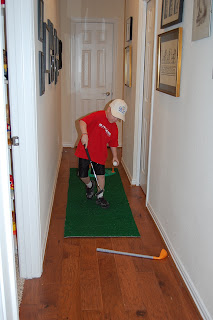 Here’s that handsome birthday boy deep in concentration. Hey, golf is a serious matter.  Look at him in his little argyle sweater vest. Love. 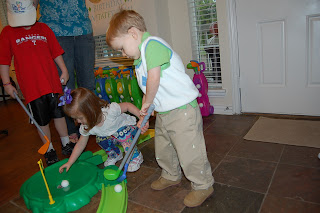 They set up a kid-size table in the living room. How cute is that little table? Jenny made the sweet banner using scrapbook papers and used inexpensive white tissue balls hung from the ceiling to mimic golf balls. 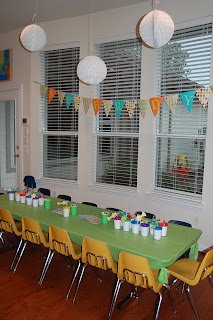 Tate’s aunt made white cake balls, and they filled green pails on the table to look like buckets of range balls! Love it. Jenny used artificial turf from a home improvement store as a table runner, and the cake was a golf hole-shaped like a number 3. 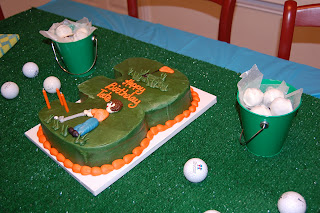 As the invitation suggested, the kids were playing golf for the coveted “Sippy Cup.” So each child got a sippy. 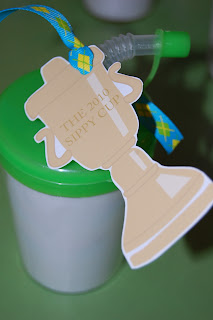 And as a party activity, each was able to personalize and decorate his or her very own Sippy Cup. Everyone’s a winner! Those are the Sippy Cup tags I made with my new fab cutter. Love that argyle ribbon. 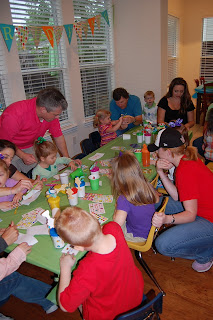 They all took home a set of plastic golf clubs, their personalized “Sippy Cup” trophy, and a sticker that said “I played a round at Tate’s 3rd Birthday!” 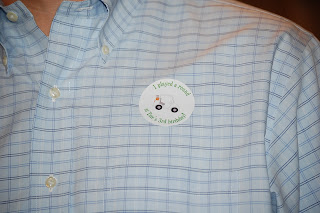 Despite the rain, everyone had a blast at the Robertson Country Club. Spoiler alert: I’m about to show the thank you notes we came up with. If you are expecting one, don’t go any further.

Well folks, this concludes our coverage of The 3rd Annual Birthday InviTATEtional. Thanks to Jenny for letting us be a part of the festivities. It was a blast, as always!

7 thoughts on “Not Just Another Golf Partee”